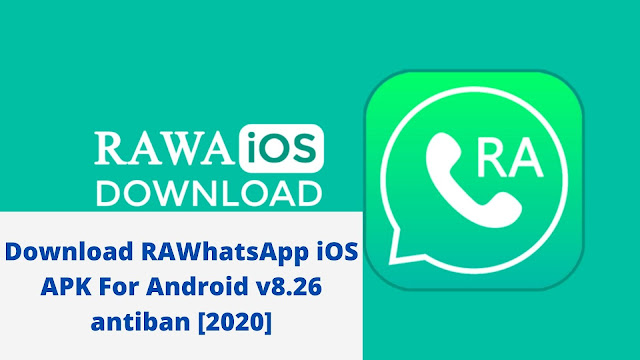 RAWhatsApp iOS APK 8.51 Download Latest (Anti-Ban) 2020 from here and experience WhatsApp iOS look and feel on your Android device. RAWhatsApp iOS APK For Android v8.51 is also another good alternative to the popular Fouad iOS WhatsApp or Delta YoWhatsapp as it comes with the light and dark iOS views.
RAWhatsApp APK is a good alternative for RCYOWA because it can give you iOS experience when using the WhatsApp. That means it provides lite and dark variant themes which looks the same as the iOS skin. However, users of RCYOWA are migrating to this edition just only because of look and feel.
With WhatsApp being the best popularly used instant messaging app around the world, it’s users keep expecting new features, but the official app doesn’t have them. To compensate for the lack of more awesome features, some developers are making MODs which offer users just the best features they need. If you would like to enjoy WhatsApp with an iOS look and many unlocked features on your Android, then RAWhatsApp iOS APK is a good choice.

RAWhatsApp iOS APK is a MOD for WhatsApp which comes with iOS UI and similar features to the popular FMWhatsApp, GBWhatsApp, etc.
This awesome WAMOD is developed by Ridwan Arifin from Indonesia and comes in two different packages. One of the RAWhatsApp has the same package name as the official WhatsApp app.

With RAWhatsapp APK, people can use two accounts of two different numbers in the one android device. This is possible because the developer has released the two packages (clone and unclone) which can install side by side without conflict with each other.